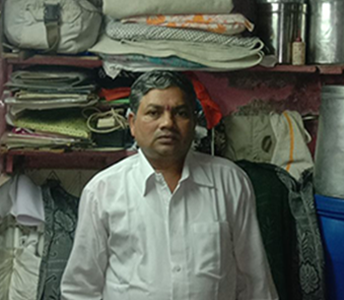 “Today, I am a proud owner of a home because of Capri Global Housing Finance. I did not have any papers and was previously rejected by other lenders. But that didn’t stop Capri Global Housing Finance from trusting me with a home loan. Today, I have got an identity and have made a new beginning in this home. I am committed to paying my home EMIs regularly and then availing a loan to grow my tailoring business as well.”

Balu Patil, resided in Mankhurd, a crowded suburb in eastern Mumbai, the financial capital of India. A tailor by profession, Balu lived in a chawl, a large residential tenement (slum) that is characteristic of the old city, with his family comprising his wife, daughter and son. “The quality of life at the chawl was suffocating – with residents constantly being at loggerheads over civic-amenities such as water supply and common sanitation facilities. In addition, the area was full of anti-social elements, who would constantly harass our daughter. We feared for our future and were desperate to move to a permanent residence in a better locality,” recalls Balu.

The quality of life at the chawl was suffocating – with residents constantly being at loggerheads over civic-amenities such as water supply and common sanitation facilities.

More than 14 million families in India live in informal dwellings – which are characterised by such unhealthy environment and often inhuman conditions. Indian cities need an urgent facelift to transform these dwellings into proper residential structures.

How Capri Global Housing Finance is making a difference.

We recognise that families residing in unauthorised or cramped dwellings are mostly part of the informal economy, often lacking in paperwork for proper identity, regular income proof and other documents required by banks. However, this cannot be the only basis to deny them access to genuine credit that leads to a better standard of living.

After evaluating Balu’s income and cash flows, we sanctioned a loan of INR 0.5 million. With this, he purchased a 250 sq. ft house in a neighbouring locality. The area is better, and the neighbours are cooperative. As a home owner, Balu is now confident of his family’s future. Balu was one of the many loan applicants belonging to the LIG communities who aspired to own homes for better living. Since our inception in 2017, we have enabled 311 families to own homes.

Not just a job.

We are on a Mission to Build India Brick by Brick